An artist book/extended zine I put together to address a few things: my current thoughts on (queer) gaming in general that functions as both information transmitter, manifesto, and catalog of my own related work. I contextualize a lot of the work in order to expound on this notion that 'games have been queer,' an appropriated thesis from Bonnie Ruberg's Video Games Have Always Been Queer (an idea that I both cherish/agree with and would like to build on/challenge). Ruberg’s statement is more definitive than mine – it’s not that I’m not confident, but my sweaty hand gripping this queer lens sure is trembling, man!

When we were kids we would play Super Smash Bros with the stock set to max and with one-hit KO bombs spawning at a fast rate. This process could last for hours as our virtual bodies exploded off and respawned back on screen. Perhaps this is the closest we could get to intimacy as young video game players.

Building levels in Timesplitters, enacting the magic spaces in our boys’ heads, my favorite ones are without light, broken in a way that makes us forget the established or expected gameplay principles. Past midnight, my dreams would become one with the levels unfolding in front of my closed eyes. 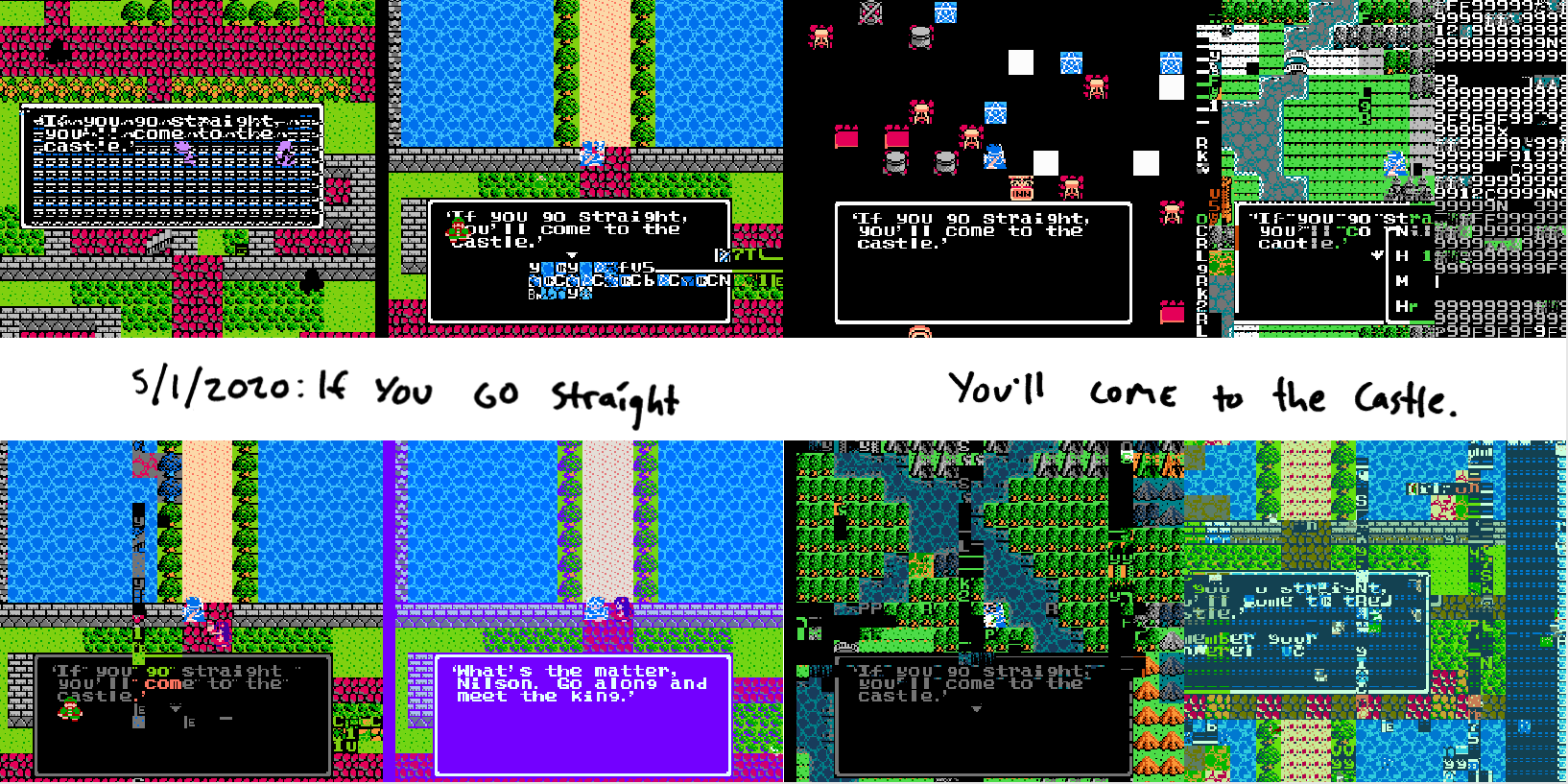 Dragon Warrior 3 glitches: If you go straight, you'll come to the castle.

The text draws from quotes, game imagery, personal anecdotes, and forum threads. I’m drawn most to queer game and anime zines. Video Games Have Been Queer follows the growth of my younger gaming years into my loves of perverted ROM hacks, dating sims, and the eventual forming of swampbabes ('bodies are a problem' changes to 'bodies toward a solution'). Queer games means subverting expectations, intersectional politics, intimacy + vulnerability, rejecting both in-game and real live binaries and assumptions, and dismantling problematized hierarchies. 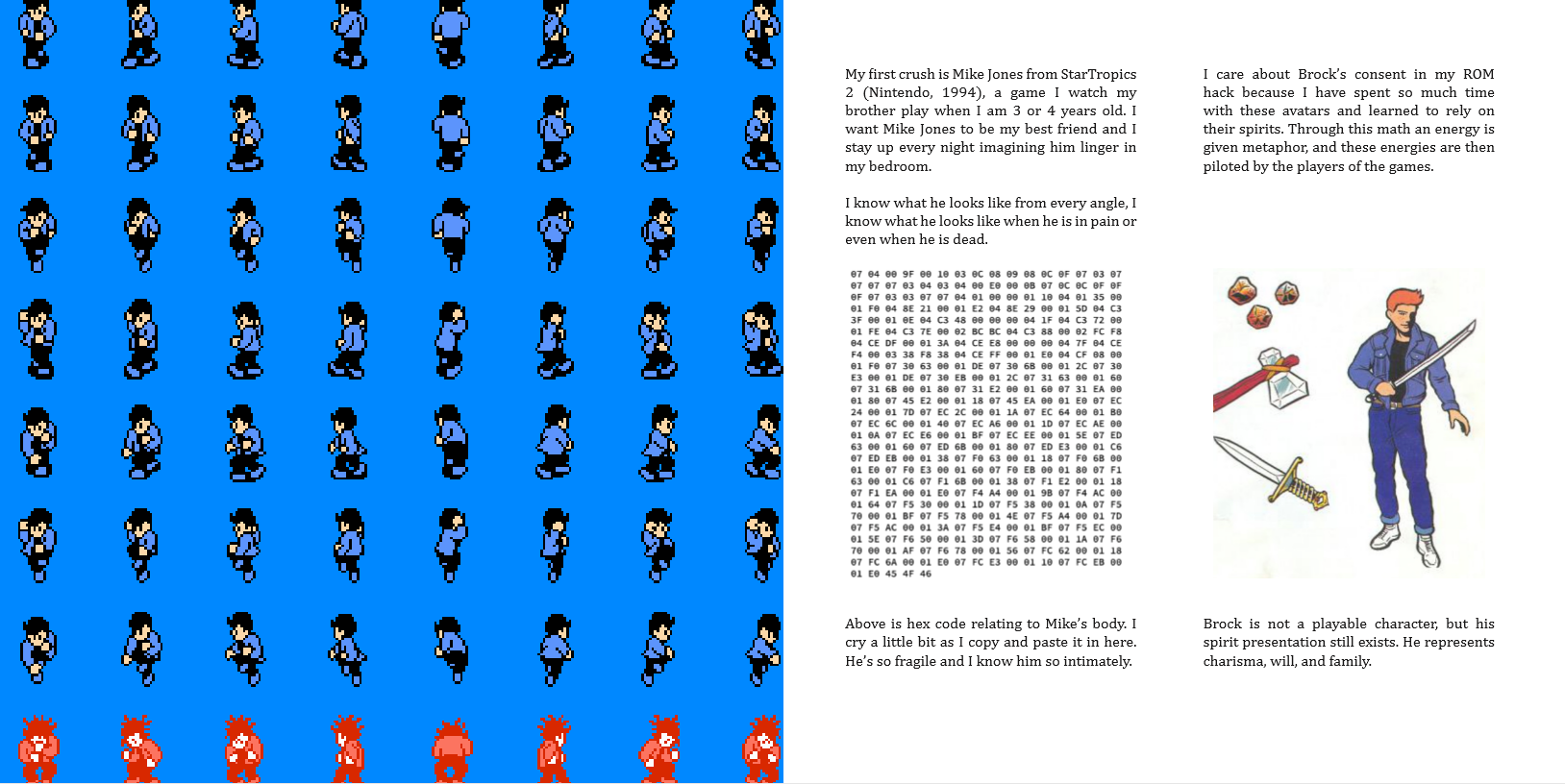 1. It’s not that I necessarily want games to have more representation (which is good but), its a queering of games and the binaries that they operate under. Games don’t need to be more realistic, but they can enact a metophor closer to the poetry of life.

2. When I entered into the MFA program at VSW (traditionally a photo and artist book program), I had a goal of subverting what I thought people’s expectations were of the intersection between experimental art and video games. It was tough going early on, but I think I explained what ROM hacks were enough times for the community to just start agreeing with me, lol. Still, it often feels dumb to try too hard in Rochester, a town that has never heard of new media and can’t get the hang of showing it. I might be whispering hideously into a hollow void (an abandoned luxury loft?) but video games have the potential to be the queerest and most experimental art. How many times do I have to say this?

I apologize again for brockwantstofuck.html (2018) + the 2-bit boy's sacred boy

For PDFs or print version, please feel free to email me at nilsonthomascarroll [at] gmail com.